C-MET is engaged in development of aerogels for last few years and developed aerogels of different materials for specific applications, say, carbon aerogel for aerogel supercapacitor, metal doped aerogel compositions for hydrogen storage, silica aerogels for thermal insulation applications, etc. C-MET is now equipped with the facilities for preparation of Aerogel of different materials and its processing techniques for specific applications.

Carbon aerogels are special class of porous monolithic solids, in which nano-meter sized carbon particles are inter-linked in 3D network. Organic gels upon implementation of suitable drying technique followed by carbonization lead to the formation of corresponding Carbon aerogels.  Because of high specific surface area, high open porosity with tunable pore sizes and light weight, Carbon aerogels are found to be the most idea choice as electrode materials for variety of applications, such as electrode for EDLC, PEM based fuel cell, Li-ion batteries, etc. C-MET has developed the indigenous technique of making wide range of carbon aerogel compositions having the superior specifications for hydrogen storage and supercapacitor applications. 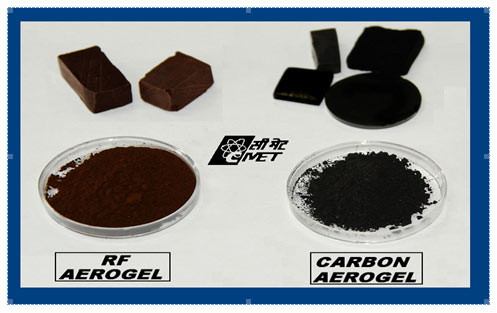 The characteristics & specifications of Carbon aerogels developed at CMET are 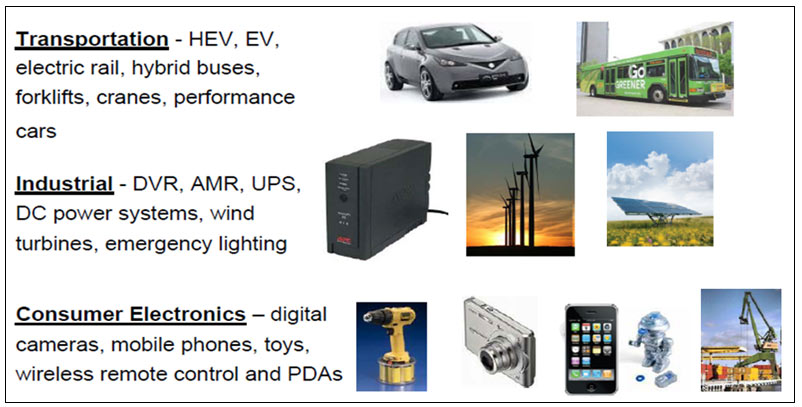 Supercapacitor based storage system will definitely go a long way in supplementing/ replacing some of the existing conventional devices like different battery based systems. Further, the advantages of supercapacitors open up new applications as well, especially the effective harvesting/storage of solar /wind energies and hence its demands are also increasing day-by-day.

Development of materials for energy storage is one of the thrust areas of C-MET and the Aerogel team of C-MET has developed Aerogel Supercapacitors of different sizes/values for specific electronic applications. Carbon aerogel based Supercapacitors developed at CMET exhibited the following characteristics 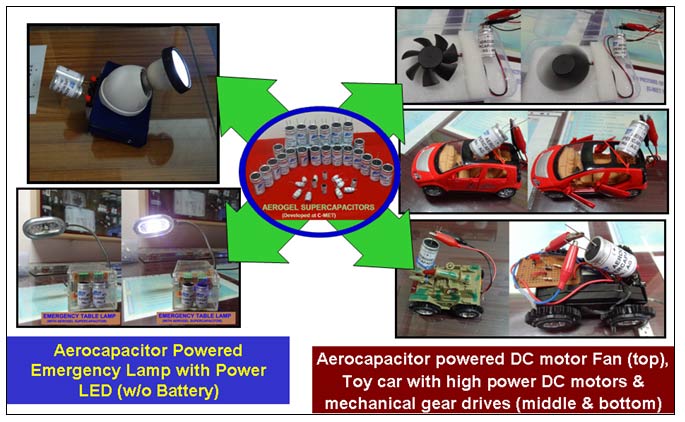 The development and demonstration of technology for production of carbon aerogel and aerogel supercapacitors in pilot scale is in progress.

Being the lightest material with ultra-low thermal conductivity, silica aerogels can be used as suitable candidates for TPS (thermal protection system) in space vehicles as well as in other insulation purposes such as refrigerators, industrial insulations etc. C-MET has also developed low density and high surface area silica aerogel of different sizes & shapes for the TPS applications.

Dye sensitized solar cell (DSSC) have attracted much attention as they offer the possibility of extremely inexpensive and efficient solar energy conversion. DSSC which converts light energy into electrical energy consists of nanocrystalline semiconductor based photo anode. The performance of DSSC mainly depends on the dye uptake by photo anode which is directly related with the surface area and porosity of the photoanode material. Generally crystalline titania of surface area of ~ 50 m2/g are used as DSSC photoanode, however, C-MET has undertaken the development of titania aerogel for the DSSC photoanode, in nano-sized porous crystalline titania aerogel of surface areas in the range of 150-200 m2/g have been achieved. Utilization of this titania aerogel in DSSC photoanode and its performance evaluation are in progress.